Starbucks just rolled out a new paid parental leave policy that gives 12 weeks of fully paid leave to new parents—new fathers, adoptive parents, and domestic partners included – and includes an extra six weeks for birth mothers, but one aspect of this policy doesn’t sit quite right with many employees. According to Marie Claire, these benefits are only available for corporate employees.

Baristas, by contrast, receive far fewer benefits for new parents, with just “six weeks of paid leave for birth mothers, and no paid leave for dads or adoptive parents.”

A lot of people are unhappy with this news, but two moms are especially frustrated and taking the fight to the higher-ups at Starbucks. Jess Svabenik, from Washington, has been a barista for eight years and is expecting her fourth child, while Kristen Picciolo in Ohio has a four-month-old son. Together, they had a private meeting with company executives Ron Crawford and Zulima Espinel. The response they received at that meeting was less than encouraging; Svabenik said “they were kind of confused that we were there.” 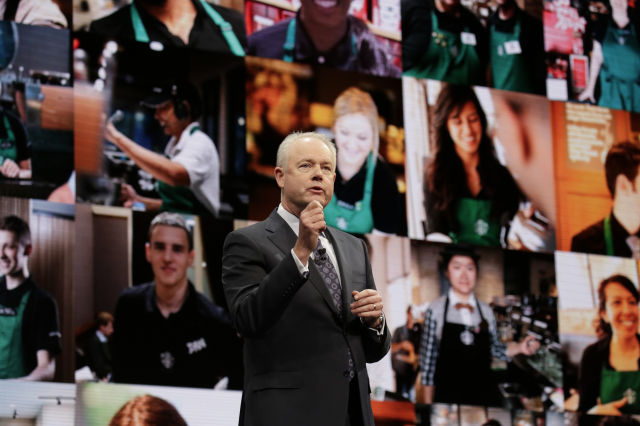 Picciolo wasn’t done there, and traveled to Seattle for a Starbucks shareholders meeting. There, she addressed the incoming and outgoing CEOs of the company about the disadvantage the new policy creates for the baristas. Howard Johnson, the incoming CEO, “thanked her for her comments and said he remained open to hearing feedback from employees.”

This upset in the benefits plan for Starbucks employees doesn’t really connect with the other employee benefits the company offers. In contrast with companies like Walmart, who, according to Marie Claire, are not new to creating a divide between corporate and retail employees, this is the first time Starbucks has done so. Their other employee benefits, like their 2014 College Achievement Plan, are leaps and bounds ahead of what most other retail or food service employers offer.

The policy won’t be in effect until October, and employees like Svabenik and Picciolo are hopeful that, with the help of online petitions, Starbucks will look into putting an equal policy into effect instead.