I doubt it’s a coincidence that on the first anniversary of the Parkland school shooting at Marjory Stoneman Douglas High School, the writers and actors of Grey’s Anatomy served us another bout of topical realness on a silver platter. In this week’s episode, “I Walk the Line," a 15-year-old shooting victim named Collin served as one of the prime patients at Grey Sloan Memorial Hospital.

While Colin was playing the bagpipes during a parade, a drunken man got “worked up” by the music and put a bullet through Collin’s hand and into his chest. He claimed his gun had slipped, and that he’d meant to shoot straight up into the air. Since we never actually met the shooter—all of this information was relayed second hand—I’m left here to wonder why in God's name a parade-goer thought their gun to be an appropriate thing to bring along in the first place. But, like many of the shootings we see every day, we will never know why 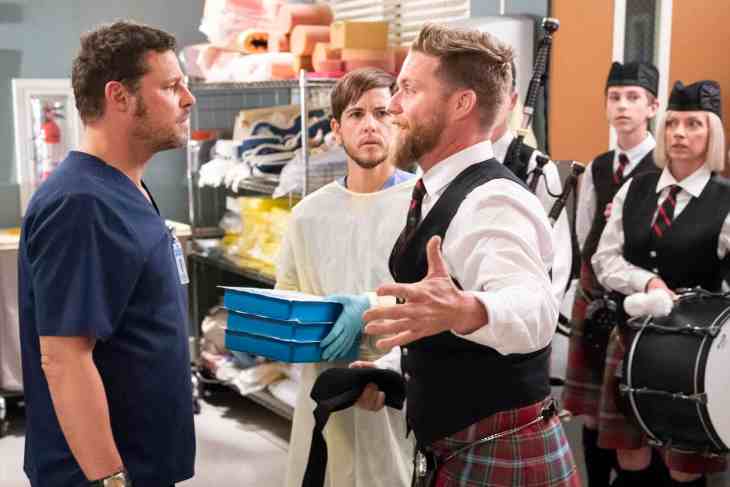 Unlike the shootings that have taken place in real life, it was only the one shot. In the ensuing panic, multiple others in the crowd were injured as they tried to escape, but we never met any of them either. I think it’s safe to assume that none of their injuries were severe. But thanks to this one idiot with a gun, this little boy came out of the ambulance, scared and confused, and headed straight into a trauma bay where he lost his airway.

While the surgeons wheeled Collin towards the OR, his father told them about a Scottish school shooting, where a man had walked into the gym and opened fire on children (it’s a real event, btw). “We still talk about it,” he said. “We still cry about it. We still pray about it, and we changed the gun laws because of it. We said, ‘never again’, and there’s never been another one. My boy could die, and nothing will change because of it. …How can that be possible? …he was just walking down the street, and he was just playing his music."

He was just another person in the wrong place at the wrong time. During the surgery, Alex said that it wasn’t even the first kid with a gunshot wound that he’d treated that week, and Jackson was sure that it wouldn’t even make the news. In the end Collin survived, though he was missing part of a lung and had a lengthy hospital stay ahead of him.

Can incorporating these stories into the shows we watch every week strike the right chords in the right people, when reality never seems to? Every time a child is shot in this country, we say "Never Again" (if we even hear about it). Every time a child is shot, we rally for gun control, we rally for coverage, and we think, "This is it. This is the incident that will inspire a change." And yet, nothing ever does.