You’re going to college. Gah! Eek! Aah! There isn’t a nonsensical syllable out there that can encapsulate all of the excitement, fear and apprehension you’re probably feeling now. Fortunately, you’re not alone. There are many things that everyone who moves away to college worries about, and most of them aren’t as big of deals as you think they are.

Without further ado, here are the three things that have been keeping you up at night as you face your first semester of college as well as tips for how to deal with them.

When you were in high school, you had a solid group of friends. Failed a test? Got rejected by a potential prom date? Your friends were there to help you fight the disappointing things in life. They could lessen the impact of any problem with a hug and a joke.

Cut to the first day of fall semester of college: You don’t know anyone, and you’re worried about never having someone to eat with in the dining hall. Or worse, you’ll hang out with people you don’t really like for the sake of having some company. You feel like you’re expected to slay a dragon without your sword and armor.

First, there’s the fear that you’re not going to meet anyone. This is as silly as worrying that Cory and Topanga will get a divorce. “Did you have friends in high school? Then you're probably a pretty likeable person,” says Iris, a junior at UCLA. “People will want to be friends with you—promise!”

You are one member of an entire class of incoming freshman who are all worried about not knowing anyone. “Everyone is looking for friends during orientation, welcome week, throughout the first semester and sometimes all of freshman year,” Iris says. Even if you’re going to a smaller school, there will be hundreds of potential friends waiting in line for the cereal bar or taking the shuttle bus downtown. You’ll meet people.

However, there’s the pressing concern that you’re not going to meet anyone you like. In your rush to find someone to sit with at lunch, you might start hanging out with the first people you see and spend all of freshman orientation with them before realizing you don’t have anything in common. Maybe they’re constantly making jokes at your expense, or maybe they have no interests beyond the latest Kardashian scandal.  They’re just not the people you want to spend your free time with—the type of people who can even make a trip to the grocery store fun.

This is what happened to Amanda*, a junior at the University of Rochester. “I met my first college ‘friends’ more or less by default,” she says. “Most of them were really nice people, but hanging out with them, I often got the feeling I was surrounded by acquaintances rather than friends.” If you find yourself in this situation, don’t feel like you need to settle for people who don’t make you feel good about yourself.

Fortunately, college campuses are concentrated areas of people your age who have many of the same interests and fears that you do. “Go up to people, because chances are high they were too shy to talk to you and will be really happy that you took the initiative,” Iris says.

Try making small talk with people you meet in your favorite place on campus (whether it’s the gym or the German philosophy section of the library). Go to club interest meetings or ask friendly people in your classes if they want to grab lunch after lecture.

“Once I managed to find one or two people I could actually be myself around, it was surprisingly easy to make real friends with the fun, interesting people they introduced me to,” Amanda says. You only need one or two good friends to start building a supportive group of friends.

2. “How am I supposed to choose a major when it takes me 20 minutes to decide which shirt to wear each day? You hate the question “So what are you planning to major in?” First of all, it’s so clichéd—everyone from your ninth-grade gym teacher to your great-aunt seems to be asking it. Second, all of your life aspirations and philosophies can’t be conveyed by something as small as the subject you’re going to study in school. Third, and most importantly—you have no idea how to answer it.

You’re unsure about which major to choose, and you feel like this means you don’t have a future. If you were to flip over tarot cards, they’d be blank. You know you’ll need to declare a major soon, but you don’t know what to do.

The good news is that you have the next few years to complete your graduation requirements, so this is the time to explore and experiment. Freshman year is when you’re supposed to have a blank crystal ball.

Dr. Alistair Kwan, who has advised students at the University of Melbourne, the University of Rochester and Yale University, started his undergraduate career studying architecture but ended up switching his major more times than he can count. “I couldn't have known in advance that architecture was not what I really wanted to do, nor that some of the other majors even existed,” he says. “At that stage I couldn't have foreseen what I'd become a few years later.”

However, Dr. Kwan ended up returning to architecture for his dissertation. “Giving up a subject early doesn’t necessitate giving it up forever,” he says.

His advice for freshman? “Don't pick a major — pick three or four! Or more!” he says. “Put them together, let others join the fray, see what emerges.” In other words, don’t stress about knowing exactly what you want to do now. Be open to anything, and you’ll find a match made in major heaven.

Dr. Kwan offers some things to keep in mind while looking for courses during your freshman year:

Ultimately, it doesn’t matter what shirt you decide to wear as long as you feel comfortable in it (you know, don’t wear a tank top the day you go sledding). The same is true of your major. Don’t worry too much about the words that will end up being a line on your resume. Worry about using the next four years to grow as a thinker.

3. “How will I cope with being away from my family?” 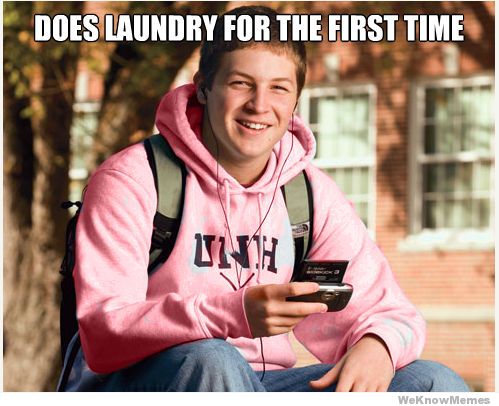 You thought you were ready to move away from your parents’ overly watchful eyes, but now you’re having second thoughts. When you get the flu, who will call the school and make you chicken noodle soup? When you get wrapped up in school and friends, who will do your laundry and cook you dinner? When you just need a hug, who will love you unconditionally?

As you pack, you turn off Kelly Clarkson’s “Miss Independent” and pump up Carrie Underwood’s “Don’t Forget to Remember Me.” You don’t want to admit it, but you’re worried about doing all those things your family usually does for you, and you’re worried about feeling lonely.

We’re not going to lie—homesickness is hard, and it can hit you when you least expect it. You’ll feel like you’re going through the motions of your day, wasting time until you can be back in your hometown bedroom with your dog and the window view of your street.

“Just stick it out,” says Patricia, a senior at the University of Rochester. “It’s terrible the first few days, but then it gets better.”

It gets better because you get stronger. You’ll find that you have what it takes to live on your own. You can do your own laundry, keep your room (mostly) clean and keep track of your commitments. Once in a while you’ll mess up (oversleep and miss your freshman writing seminar, perhaps), but you’ll figure out what you need to do (email the professor and make up the work) on your own. Plus, you’ll find that lying in bed with Netflix and tea when you’re sick is just as great a remedy as chicken noodle soup ever was!

You’ll probably realize that moving to college is the ideal way to get used to living on your own. Think about it: When else will you have a decent place to live without having to worry about paying the electricity bill and cooking for yourself every day?  Focusing on the perks of your situation can help you put your life in perspective.

Patricia says that “the freedom to make your own schedule and not having parents/people hovering over you” are two of her favorite things about living on her own. Ask any collegiette and she’s sure to agree!

Even if you feel like snuggling under your covers and feeling sorry for yourself those first few days or weeks, put on a smile and get out there. After all, it’s called “living on your own,” not “moping in bed all the time on your own.”

“Be friendly towards everyone!” says Brigid, a senior at the University of Rochester. “Friends make homesickness much easier to bear, and you never know who will end up being your closest friends.” You know, the friends you’ll feel homesick for during Christmas break.

If you feel overwhelmed or if the loneliness doesn’t go away, “you should know how to [utilize] campus resources, such as counseling services,” Iris says. “They are so helpful (and free!).” Asking for help when she needs it is one of the strongest and smartest things a collegiette can do.

College is supposed to take you outside of your comfort zone—that’s part of how it helps you grow and become an adult. Be prepared for some changes, but know that you can handle anything that comes your way!

*Name has been changed.