You're in a relationship, and it's finally working out. You even think you've found “The One” … until he breaks up with you because “your lives are going in different directions” or you're just “so much more mature” than him. Ugh. His meaningless excuse sounds like it came straight out of a bad rom-com, and it leaves you stranded and confused.

Everyone struggles with breaking up, but some guys think the solution is to give us a bogus excuse for it – maybe to avoid hurting us or just because they don't have the courage to tell us the truth. That’s why we put together the worst breakup lines collegiettes have ever heard and asked experts what these excuses truly mean and how to deal with them. 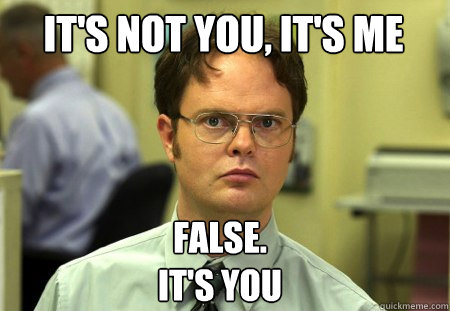 This is probably the most overused and clichéd excuse in the history of dating. According to Carole Lieberman, M.D., psychiatrist and author of Bad Girls: Why Men Love Them & How Good Girls Can Learn Their Secrets, “this is supposed to hurt the girl's feelings less, but it's just a way for the guy to feel less guilty.”

Worse yet, Jodi R. R. Smith, president and owner of Mannersmith Etiquette Consulting, says, “Of course it is you. You are not right for him and this is easier to say than, “I don’t like you.”

The Excuse: “Our lives are going in different directions.”

Shira Kipnees, a senior at Franklin & Marshall College, knows this bogus one-liner all too well. When her ex-boyfriend broke up with her (over Skype!) after almost three and a half years of dating, he gave her this excuse “partially due to the fact that I ‘want kids one day’ and he doesn't like kids really at all,” she says. Shira thinks “he felt like his life was being too predictable and thought-out, since we had a very serious relationship.”

Even though they had been together for so long, this sounds like a fake excuse to us. Yes, Shira wanted kids one day, but not right that second! Besides, she says she was too busy “dating a perpetual man-child.”

According to Ashley Marie, a love and relationship coach, what Shira's ex really meant was: "I can't see your future fitting into my future, and I don't want to make the effort to see if we can make that work.” Ouch. This guy was immature and probably not worth her time anyway.

The Excuse: “You're just so much more mature than me.”

Laura*, a senior at Yale, went through a bad breakup when her boyfriend blamed her for her “maturity,” when really it sounds like his immaturity was the problem.

This is a just polite way for a guy to say he wants “to keep partying and hooking up with girls,” Laura says. This guy is actually being pretty honest; he does have some growing up to do. “When your guy utters this line, believe him the first time!” Smith warns. “Let his mother mother him.”

Is this the biggest breakup paradox or what? “This guy dumped me twice because he (ironically) didn’t want me to get hurt,” says Hayley Brunk, a junior at Tiffin University.

There might be some truth in this excuse, because if a guy liked you in the first place, he genuinely cares about your feelings, according to Mark Sharp, Ph.D., a clinical psychologist at The Aiki Relationship Institute. However, “he thinks his weaselly excuse will go across better than the fact that he decided to date somebody else or some other thing that might be hurtful.” We knew it was too selfless to be true.

The Excuse: “I might be moving out of state in a couple of years. I don't want to date you and then just move away.”

Lauren Burkett, a collegiette at Florida State University, said her boyfriend broke up with her using this line. “He didn’t want to date me anymore, so he made up a really dumb excuse,” she says.

This guy is also pretexting good intentions to cover up the fact that he isn’t interested in your relationship. He may truly have plans for the future that “involve [him] being single,” Marie suggests. Either way, he is not willing to give you the time that you deserve.

The Excuse: “I can’t do this anymore.”

“A guy got caught lying to me (he said he was going to bed, but I went for a walk with my roommate and found him messing around with some girls on my floor), and instead of manning up, he texted me saying, ‘I just can't do this,’” Hayley says.

This excuse basically works in every possible situation, and it doesn’t mean very much at all. Someone who gives you this line is either too lazy to come up with a legitimate reason or too much of a coward to be honest.

Either way, he’s definitely not a catch. “Yes, adult relationships take work,” Smith says. “If he is not ready to make the effort, send him packing.” Now that's advice we like.

According to Lieberman, this is yet another commonplace excuse guys give you instead of telling you the truth. Although he may very well still be hung up on his ex, if he liked you enough, this wouldn’t be a problem.

“You would essentially be a rebound,” Marie warns. And nobody wants that.

The Excuse: “I'm not ready to be in a relationship.”

Kim* who just graduated from The College of William & Mary, describes a relationship she had: “He was moving a bit fast in the beginning, but I slowed things down because I didn't want to rush into anything,” she says. “And then a month after we became official, he broke it off with the excuse: 'I thought I was ready, but I realized I'm actually not ready to have a girlfriend.'" Talk about ironic!

To Kim, “it means that he jumped into a relationship without realizing the responsibilities that came along with it.”

Marie agrees. “What he really means is, 'I just want to party and have a lot of sex with a lot of different women,'” she says.

However, Smith has a different approach to this situation. “The translation is that he may or may not want to be in a relationship right now… he just would rather be single than be with you,” she explains.

The Excuse: “I’m bringing you down."

“My ex told me that I had a lot of potential and he was 'bringing me down by distracting me from my schoolwork!'” says Aja Frost, a junior at California Polytechnic State University. Oh, come. On.

Aja's interpretation is that “he wanted a guilt-free way to break up, so he was trying to convince both of us he was a negative influence on me.”

Bottom line, a guy who uses this excuse is looking for the easy way out.  However, Marie says that he “still wants you to feel good about yourself.”

The Excuse: "Summer is on its way, so let's see how we feel about each other in the fall."

Chloe*, a senior at Marist College, has heard this excuse twice.“The first time I think it was definitely an easy way out,” she says. “We could have made it through the summer, and I later learned it was just because he wanted to end it but wanted a more 'legitimate' excuse.”

Depending on the situation, this can truly mean that the guy is not ready to commit right before the summer – understandably so. But in Chloe's case, this was just a convenient way for her ex to avoid admitting that he didn't want to be in their relationship anymore.

Why do guys use these excuses?

You might be wondering why guys feel the need to lie or hide the truth, when all you want is a straight explanation. Well, believe it or not, guys don’t usually have the wrong intentions, and they legitimately think a white lie is the fairest way to break up with you.

Sharp’s best advice is that “you should take any reason given for a breakup with a big, old grain of salt. It is not the place where people tend to be the most honest, so don't make too much of what is said.”

There are endless reasons to break up with someone, but there are four main reasons why someone won’t tell the truth when breaking up with you, Sharp says: “They want to hurt you, they want to protect you (not hurt you), they don't want to make themselves vulnerable or they are pretty confused and don't know themselves.”

“These excuses really mean that either they are simply not ready for a relationship or there is no love connection,” Smith says. Either way, don’t sit around waiting for your ex to come around. “If they can’t see what a catch you are, you should move on and find someone who appreciates you!” she says.

As for dealing with these poor excuses, Smith urges you to “respond with charm and grace.” Don’t be afraid to thank a guy for his honesty (even if you don’t buy it!) and walk away. This will make you the bigger person, and you really have nothing to gain from lashing out at your ex anyways.

Remember Sharp’s advice and don’t take these ready-made lines too seriously. Be aware of what a guy’s true reasons might be, but don’t get hung up on them. Move on and focus on yourself instead!