What really goes on during sorority pledging? While many collegiettes have gone through it, some who haven’t been in a sorority have no idea what the process is like. Luckily, Her Campus got the lowdown on what really happens in the life of a sorority pledge. Check it out! 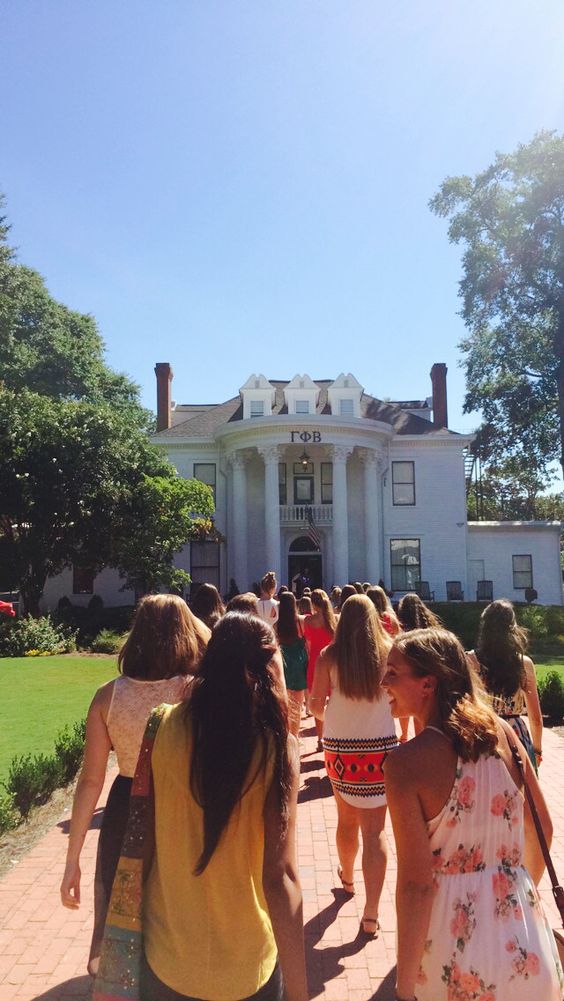 Pledging a sorority involves many different activities and meetings, many of which are mandatory. This means that for most collegiettes, pledging ends up being a huge time commitment.

New members spend a lot of time learning about the different aspects of their sorority. By the end of the pledging period, they’re expected to not only know about their sorority’s mission and values, but also about all of its current members.

“We had to learn literally everything,” explains Laura*, a collegiette at the University of North Carolina. “It was so dumb because none of that ever came up again, and I don’t think it served to bind us together in any way. We had to learn the history of the sorority, the dinner prayers, names of national leaders, etc.”

Many sororities even have a sort of final entrance exam on what they’ve learned. Some sororities will expect pledges to learn miscellaneous facts about the sorority and its members and will be quizzed on them.

“We learned lots of history, for the most part,” says Hyanna from New York University. “We [had] weekly quizzes on PowerPoints about our sorority.”

Along with the time pledges spend learning about their sororities, they’re typically also expected to attend a multitude of other events such as mandated study times, weekly meetings and other social activities. “We bonded with the sorority as a whole through sisterhood activities like letter making or sewing shirts... watching movies in our suite or painting nails, mandatory Greek Life events, and just hanging out outside of sorority,” explains Victoria*, a student at a small, private school in West Virginia.

Abigail, a Zeta Tau Alpha sister at Salisbury University, explains that the time commitment made the new member process special for her.

“I know my new member experience was time-consuming in a lot of ways, but I feel like that's what brought my pledge class closer together,” she says. “Once you spend eight weeks straight with a group of people, they really do become family, and it's a time I wouldn't trade for the world.”

However, for some pledges, the time commitment can be overwhelming.

“For me, pledging was like taking an extra class,” explains Laura. “I had to spend a ton of time not only at the house but also getting back and forth across campus from my dorm and back. I eventually ended up dropping my sorority because the time commitment was too much for me.”

Hazing forces pledges to participate in activities that are specifically designed to make them uncomfortable in some way, and it can lead to dangerous outcomes.

Hazing does still happen in some sororities, but more and more schools are cracking down on it. Many colleges have zero-tolerance hazing policies and also use other methods to prevent it. For example, the University of Alabama has a hotline where students can notify the school of hazing violations. Last fall, the University cancelled all pledging activities after a number of anonymous phone calls.

“I had a really great experience with my pledging process,” says Meghan, a Delta Gamma sister at the University of Rochester. “Delta Gamma nationally has a strong anti-hazing process, but when I first went through, I was skeptical; I thought all sororities had to haze. I went in a little hesitant and nervous about when the hazing would start, but it truly never did. Instead of forcing us to do things together, our pledge moms created really fun events for us that made us naturally want to be together.”

Brooke*, a collegiette at a small private school in Iowa who is in a sorority, explains that the hazing in her sorority has stopped in the past few years.

“I personally wasn't hazed at all,” she says. “I've heard stories that the current seniors were mildly hazed right before their initiation when they were forced to listen to the same song on repeat for a long time, but now the hazing is completely gone. We definitely have a hazing policy, and my sorority is really careful about it.”

Laura explains that she went through some hazing before initiation.

“We were forced to walk on the roof without shoes on and had to go get frozen yogurt for some of the older girls, but that’s it,” she says. “These were mostly jokes and nothing that anyone was uncomfortable with.”

But some sororities take hazing to an even worse level. Margaret* from East Carolina University said she dropped out of her pledge class after being told about her sorority’s hazing process. A sister explained to her that she would have to lie blindfolded on a table while brothers from an ECU fraternity wrote on her body what they thought were her physical flaws.

Hazing has been a huge issue with Greek life in the past, and it can be scary to hear the stories about it. However, it’s important to remember that most sororities no longer condone it.

In the midst of the chaos of sorority life, it’s not uncommon for conflict between girls to run rampant. Drama and gossip often seem to go hand in hand with the pledging process. While getting to know the current members is supposed to create an atmosphere of sisterhood, it doesn’t always go as expected.

“My least favorite part about pledging a sorority was how much the girls stabbed each other in the back and how ruthless it was,” says Callie*, a student at East Carolina University. “We didn’t know anyone, and once rush was over, the older girls who had been really nice to us turned sour and acted like we weren’t worthy of being members until initiation.”

Victoria explains that the current sisters didn’t make it easy for her to feel at home in her sorority.

“Before actually joining, the girls will act really nice and seem interested in you. They'll go out of their way to invite you to things, and it'll seem genuine and exciting,” she says. “As soon as you join, though, things can quickly change. Like many of my other sisters, I was one who was pushed to the side, who nobody wanted to get to know because I didn't party and I had a steady boyfriend. It can be really confusing because you think you're making the right decision by joining, but then it all seems so fake.” Some sororities even force girls to gossip and cause drama at mandatory events.

“Every week at chapter there was a cup that was passed around where you put in ‘anonymous’ stories you knew about crazy things other girls had done over the week,” says Laura. “For example, ‘What girl had not one, but two guys in a bar bathroom on Friday?’ or ‘What girl peed on the street Saturday night?’ That was a little weird because they would read them out loud at the end and everyone sort of knew who had done what.”

While this doesn’t mean that every sorority girl is fake and two-faced, it does show that the process of joining and being a member of a sorority does not always go as expected, and it isn’t for everyone.

“You just have to find where you feel like you belong, bond with others to the best of your abilities, and really just find your niche, whether it be in or out of sorority,” explains Victoria. I love my sorority and what it stands for. With that said, you also have to understand that you'll never get along with everyone, and it's the people, probably not the organization, that can potentially turn you away.”

But not every sorority is full of conflict and cattiness. Anna, a Chi Omega sister at the University of Nottingham, says that her pledging process was drama-free.

“I had no drama at all during pledging,” she says. “I trusted myself to pick a house I knew would be right for me, and with that came no drama and not a single bad thing to report!”

One super important part of the pledging process for the majority of sororities is the big-little relationship. At some point during pledging, each pledge will get a “big,” or “big sister,” to guide them through the pledging process. Most sororities even have a “big-little week” during which the big showers her little with gifts before revealing who she is on the last day. Other sororities just have a reveal ceremony. Pledges’ bigs act as their go-to person whenever they have questions or concerns during pledging. They are supposed to make their littles feel special and welcome, and most do a pretty great job of it.

“Big/little week was definitely my favorite, and a year later, I'm basically best friends with my big,” says Stacey, a Kappa Delta sister at Vanderbilt University. “I really wish that every girl got to experience a positive pledging period, because it really makes being in a sorority and being a new member that much better!”

However, there are some bigs that just aren’t willing to spend enough quality time with their littles to make them feel accepted and appreciated.

“My big was nice enough, and at first it really seemed like we were going to get along,” says Laura. “But after the first week or so, she became really hard to get in contact with. We hardly ever hung out, and when we did it was awkward. It always seemed like she would have rather been doing something else.” In the end, pledging a sorority is a trial run of whether or not a particular sorority is right for someone. For many, it’s a truly great and life-changing experience, but there are some who discover that pledging, or at least certain aspects of it, are not at all what they expected.

If you’re currently a pledge, tell HC about your experience with a comment below!

* Names have been changed.