A group of white supremacists and neo-Nazis armed with riot shields, helmets and bats held a “Unite the Right” march in Charlottesville, Virginia on August 12. This march occurred the day after a group of torch-wielding neo-Nazis and white supremacists marched through the University of Virginia campus to protest the removal of a statue of Confederate General Robert E. Lee. The situation, however, quickly turned violent when people arrived to protest the march on Saturday. By the end of the day, a woman was killed when a car drove into a crowd of protesters, and more than 30 others were injured. President Trump gave a statement condemning the “egregious display of hatred, bigotry and violence on many sides,” at which people were more than a little frustrated. This statement implied that both sides of the event (the white supremacists and the protesters) were equally at fault for the violence at the march, and people were rightly outraged. The man driving the car who killed 32-year-old Heather Heyer and injured many others was a white supremacist, not a counter-protester. 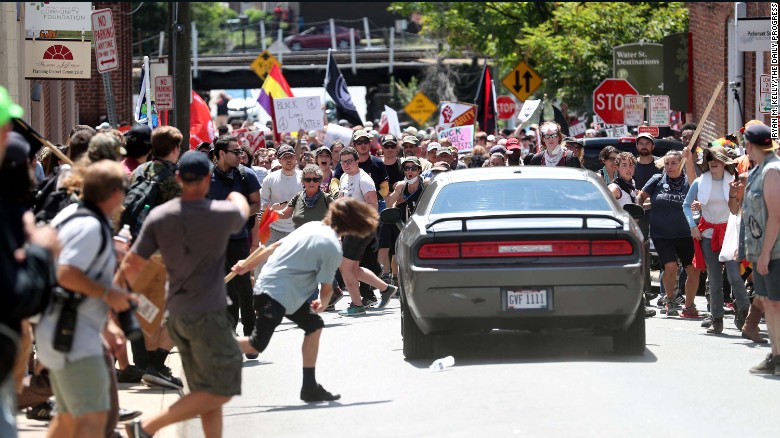 The United States of America provided its citizens the right to free speech with its first amendment of the Constitution, and this right is unarguably crucial to our society. However, I have seen far too many instances of people defending a hate groups right to visibly organize and display bias simply because the people in the group have the right to free speech. Yes, free speech is important and must be preserved, but where do we draw the line when the speech we protect leads to people’s deaths? In Germany, it’s a crime to display a Nazi flag, but in the US, white supremacists and neo-Nazis can march up and down the streets of a city waving Confederate and Nazi flags, doing the Nazi salute and screaming Nazi chants, and they receive no punishment whatsoever. Germany banned Nazi flags because it knows exactly what happens when they are displayed in public by people proud to brandish them, and I’d recommend opening a history textbook to anyone unclear on the ties between Germany and Nazis.

Free speech is a cornerstone of democracy, but hate speech can be deadly. As we saw yet again in Charlottesville, hate speech leads to death, and now many are defending these cruel people's screaming of “Jew will not replace us” and other offensive chants, because they have the right to free speech. Well, guess what? I, as a Jewish woman, have the right to live. Heather Heyer had the right to live. And she was killed because this country allows hate groups to organize and spread insidious messages which lead to violence, chaos and oftentimes death.

Don’t tell me Nazi rights to free speech are as important as a person’s right to live, when Nazi speech so often means death to someone else. Protecting Nazi speech is not patriotic, it’s not an attempt to preserve the first amendment, and it’s not honorable. It’s complicity. When we allow Nazis to make threats on people’s lives and call those threats protected, we are saying that we value their right to threaten someone else more than the safety of those being threatened. We are protecting Nazi hate speech at the expense of human life. Some may be thinking, "But these marches weren’t supposed to be violent," to which I would reply, "Why were the Nazis armed with clubs, riot shields and helmets? What non-violent events require riot gear and weapons?" There is no denying that they appeared to be prepared for violence.

Allowing neo-Nazis and white supremacists to hold marches in public doesn’t promote the message that America values free speech, it promotes the message that America cares more about hate speech than it does people’s lives. Make no mistake, the neo-Nazis and white supremacists weren’t simply gathered for a harmless meeting. They were literally calling for ethnic cleansing, and in case there are any uncertainties about the priorities of these neo-Nazis, the main organizer of the march, Jason Kessler, called it “a beautiful moment that no one will ever be able to take away from people who were involved.” Richard Spencer, a prominent white supremacist, said that the “Unite the Right” march “was a huge moral victory in terms of the show of force.” Matthew Heimbach, a leader of the neo-Nazi group Nationalist Front boasted, “We had zero vehicles damaged, all our people accounted for, and moved a large amount of men and materials in and out of the area. I think we did an incredibly impressive job.” In other words, these men are proud of the violence and chaos that occurred over the weekend, and since none of the neo-Nazis and white supremacists and none of their equipment were injured, they considered the events a success. They literally only show concern for their followers, i.e. white people who are neo-Nazis and white supremacists, and they were pleased at the horrors that took place. A woman died as a direct result of these hate groups, and many more people were injured, and these leaders are delighted and proudly declaring moral victory.

If America wants to protect these disgusting messages and call it free speech, I want no part of it. Calling for the death and injury of others should never be accepted or protected.The United States can’t have hate speech protected by the first amendment and then act surprised when people die and get hurt at the hands of Nazis. These white supremacists and neo-Nazis are neither patriots nor free speech advocates nor citizens just speaking their minds; they are terrorists, plain and simple, and they ought to be treated as such.