I’ve never been to France or China or Australia, but with the help of Google, I might be able to at least see space. That’s right, Google Maps has added the International Space Station to its Street View, according to BBC. The project was released Thursday, 48 years after our first landing on the moon (otherwise known as Moon Day in popular culture), and shows all modules of the International Space Station (aka the ISS) for all those who curious about how astronauts live when they aren’t on land.

The ISS, which is inaccessible for most wanderlusters, can be viewed in 360 panorama views for the general public on Google Street View. All fifteen nodes (rooms, for us non-celestials) of the space station can be seen and experienced right here from Earth. Each room not only has the full panorama but text descriptions of objects and rooms to explain what it's really like to be up there. According to Newsweek, the ISS contains five bedrooms, two bathrooms, a gym and many space labs for the different space stations. Six people are able to live in the station at a time—and now it feels like we do too. 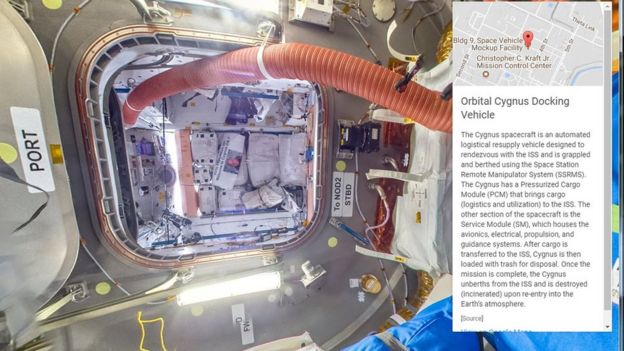 The project, which took six months to complete, presented unique challenges for the Google team. While they have gone to extreme places like the Great Barrier Reef before, it's not like Google could just head on up to the ISS. Since they couldn't use a member of their own team, they had to find an astronaut to help photograph the station. The entire station was photographed by French astronaut, Thomas Pesquet, of the European Space Agency. The station was captured on DSLRs rigged by bungee cords, since there are no tripods in space. Don't forget about the whole zero-gravity thing either.

Check out the video below for some truly awe-inspiring views.