Kim Kardashian, like many other celebrities, is not one to stay silent in the wake of a tragedy. Following the bombing at an Ariana Grande concert in Manchester Monday night, Kardashian posted a series of tweets using her influential platform to express her fears and send prayers to those in Manchester. However, a number of Twitter users attacked Kim online for a now-deleted tweet, though many other celebs shared similar posts.

Although the tweet is no longer on Kardashian's timeline, Refinery29 was able to obtain a screenshot before it was deleted. 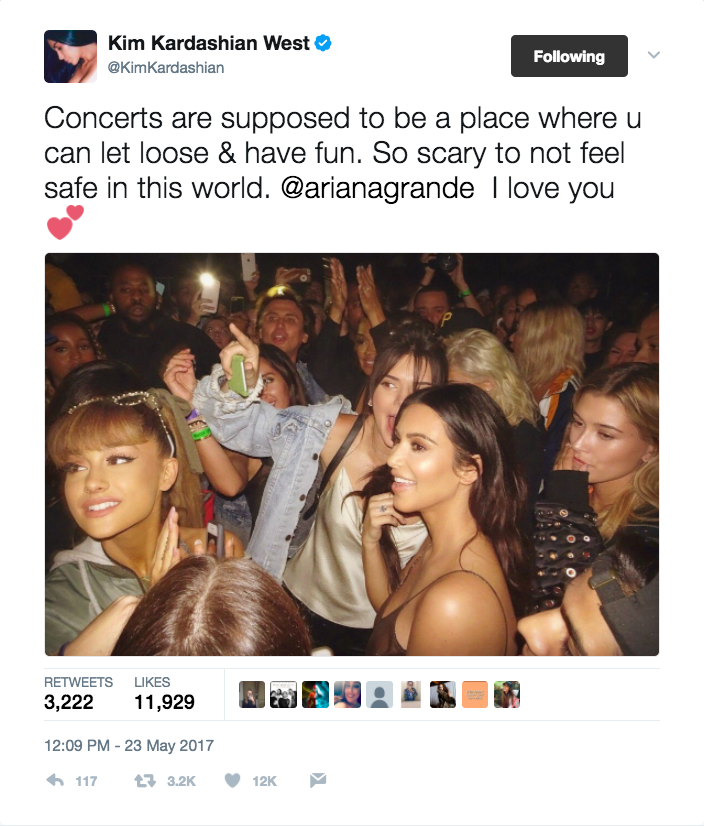 Soon, tweets from disapproving users came pouring in, with one writing, "The need for you to post a pic of yourself...disgusting"

@KimKardashian@ArianaGrande The need for you to post a pic of yourself...disgusting

@KimKardashian@MENnewsdesk@ArianaGrande And you needed this opportunity to post a picture of yourself???#leaveoff

Another Twitter user responded to one of Kim's other tweets with their own screenshot. "@KimKardashian We're never going to forget when you posted an inappropriate pic and made the #Manchesterbombing all about you. (Screenshots are forever.)"

It appears that fans are upset with the reality star for using the attack that left 22 dead as an "opportunity" to post a picture of herself, deemed inappropriate because it shows her, sister Kendall Jenner and Ariana Grande smiling and having fun at what appears to be a concert. Sure, the selfie queen is no stranger to sharing her own photos, but many users were quick to call out Kardashian specifically while many other celebs were sharing their sentiments without such backlash. Miley Cyrus even Instagrammed a sweet pic of her and Ariana to express her sorrow for the pop star, and she hasn't received the same reaction Kim has.

It appears that many are failing to understand Kardashian's motive for posting that particular picture. They're quick to claim that it's an act of narcissism while Teen Vogue speculates that this could very well just be the star's way of connecting with the tragedy and sending love to Grande, making the point that concerts should be carefree and fun rather than filled with terror.

Additionally, Kim used her platform to express her sentiments about the parents and children affected, since a number of the identified victims are young children and teens.

Kim posted a follow-up tweet after the deleted post as well. "I'm praying for everyone in Manchester. This is truly so senseless & heart breaking," she wrote.

I'm praying for everyone in Manchester. This is truly so senseless & heart breaking.

Considering many celebs used their platforms in the same way that Kardashian did without such dispute, hopefully the internet can focus its energy on the true issues at hand.