If you’re anything like us, you’ve spent many nights avoiding your responsibilities and binge-watching the roller coaster that is Grey’s Anatomy. At this point we're 13 seasons in and there’s not much that would surprise us, but there are plenty of things the show has ruined for us. Here are 15 things you’re only afraid of because of Grey’s Anatomy.

(Before we go any further, there are spoilers below, obv.)

After the infamous plane crash that claimed the lives of two major characters, you’re now triggered whenever a main character gets on a plane—and you might do a double take when you have to get on a plane, too.

Who can forget the time Addison peed outside while living in Derek’s trailer and got poison oak?

We lost our first original intern to a bus, but the actual chances of that happening are slim. Although you might still look at buses a little differently.

4. Getting impaled by a pole

Back in Season 2, during “Into You Like a Train,” two victims of a train crash were impaled by a steel rod, and the doctors had to choose which one to save and which one to pull off. There’s probably not even a statistic for the chances of this happening, but it still gave you the chills to think about.

5. Being left at the altar

You think you’ve found the one, you’re about to get married, and then… nothing. You get left at the altar like Cristina. You still haven’t forgiven Burke for it.

6. Having in-laws that want to shave your eyebrows Maybe Cristina dodged a bullet by being left at the altar, after all.

7. Falling in love with a guy and then finding out he has a wife

Or maybe a girlfriend, since we’re still in college. Either way, not cool. Especially having your hand on a bomb that could go off if you move at all. No pressure or anything.

9. Having to cut the LVAD wire of the man you love 10. Getting a brain tumor and hallucinating about ghost sex

Even if you liked Izzy, that was still a little weird. But hey, anything is possible on Grey’s Anatomy.

11. Your mom hooking up with your coworker—and accidentally reading their sexts

Parents’ private lives should stay private, but poor Jackson didn’t get that luxury. If you’re anything like us, you probably cringed throughout that whole episode.

12. Getting impaled by an icicle 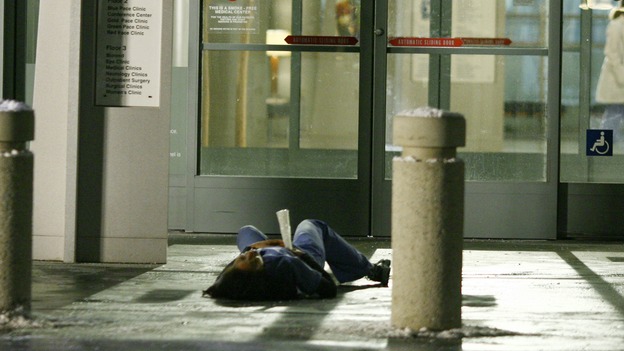 Seriously, what are the chances?!

Rhimes is the writer of the show and constantly ruins your day since all your favorite characters are in the palm of her hand.

Because you know by now that nothing good has ever come from that song playing during an episode of Grey’s.

You know things are about to go down and someone is probably going to die when you hear this song.