FBI Director James Comey announced on Monday during a hearing in front of the House Intelligence Committee that the FBI is currently investigating ties between Donald Trump’s presidential campaign and the Russian government. They are also looking into whether there was any collusion between the two parties that dramatically affected the 2016 election. "That includes investigating the nature of any links between individuals associated with the Trump campaign and the Russian government and whether there was any coordination between the campaign and Russia's efforts," Comey said in his opening statements. 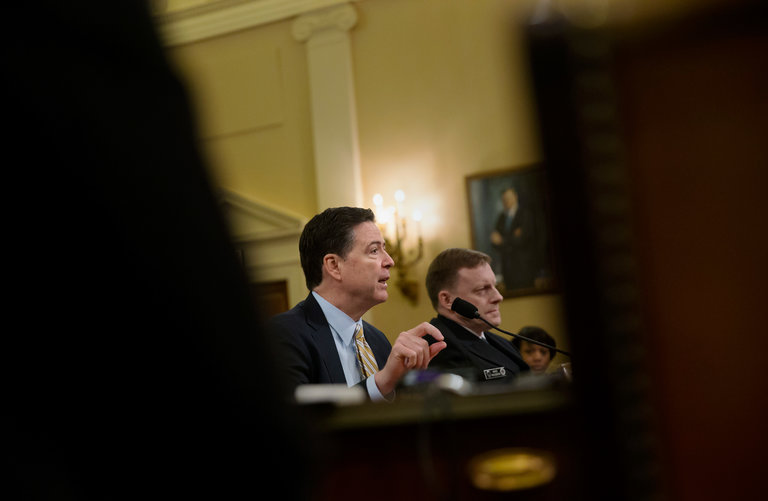 The formal announcement came as a shock to many, considering that the FBI does not usually confirm the existence of open investigations, according to BuzzFeed News. However, Comey said that “in unusual circumstances, where it is in the public interest, it may be appropriate to do so.” Also surprising was the fact that the investigation has been ongoing since July of 2016, months before the election actually took place. According to Comey, the FBI has had strong suspicions about Russia’s involvement for quite some time. "They wanted to hurt our democracy, hurt [Hillary Clinton], help him. I think all three we were confident in at least as early as December," Comey said.

According to The New York Times, an investigation of this sort is not necessarily focused on finding someone to prosecute, although there might ultimately be charges filed if the FBI thinks it’s appropriate. The investigation also isn’t hard proof of wrongdoing. However, there is evidence of repeated contact between members of Trump’s campaign and Russian officials. Ultimately, the goal of the investigation will be to prevent similar situations in the future, particularly since, as Comey suggested, this will not be the last time Russia tries to intervene in U.S. elections.

Representative Adam Schiff, the top Democrat on the committee also highlighted why he believes such an investigation to be necessary, saying,"Many of Trump's campaign personnel, including the President himself, have ties to Russia and Russian interests. This is, of course, no crime. On the other hand, if the Trump campaign, or anybody associated with it, aided or abetted the Russians, it would not only be a serious crime, it would also represent one of the most shocking betrayals of our democracy in history." Trump’s first national security advisor, Michael Flynn, was forced to resign when information about his meetings with Russian officials came to light and Jeff Sessions, the attorney general, has been criticized for not disclosing his own similar conversations.

Comey says the FBI has no information that supports Trump's wiretapping claims. pic.twitter.com/9OTTZqSOXa

During the hearing, Comey also responded to President Trump’s now infamous claims on Twitter that President Obama had him wiretapped during the campaign. He was very firm that such a thing would be not only highly unlikely, but legally impossible. "I have no information that supports those tweets," he said, before clarifying that no president could order the wiretapping of a single American citizen.