Spring break is pretty much the highlight of the spring semester—and, let’s be real, probably the entire school year. You might not be running around with James Franco all week à la Spring Breakers, but you’re definitely expecting to have a good time. During your week of partying (hey, we don’t judge) and mingling with a whole new pool of cuties, it’s pretty likely you could find yourself hooking up with someone.

While we all wish we could make ourselves believe that we’ll be regret-free by the time we’re road-tripping home, hookups can easily lead to a lot of regret, especially if you’re not careful. Follow our tips for staying sexually safe over the break and you’ll be less likely to come home from your break with, uh, an itch.

1. Have a plan with your friends

Remember how, in grade school, you had designated meeting spots to go to in case of a fire or other emergency? Good news, ladies: It’s finally time to put those skills to good use.

In a crazy beach town or all-inclusive resort, there’s a ton of things to do and lots of people to do them with. Since you’ll be meeting new people (particularly potential hook-ups), you probably won’t end up staying with your group of friends the entire time. It happens. What’s important is that you guys have some kind of plan for making sure that, at the end of the day, everyone is together and in one piece.

Dr. Ramani Durvasula, PhD, a psychology professor and licensed clinical psychologist, says staying connected with your friends could prevent you from making a dumb, drunk decision. “Keep checking in with friends so you’re not hooking up while too intoxicated,” she says. “That’s when bad decisions are often made.”

Plan to meet up at a spot for lunch and make everyone chug a bottle of water. Plan on seeing your friends back at the condo at the end of the night, unless someone has (soberly) specified otherwise. No matter your plan, make sure you stick to it. Not only is it more fun to keep up with your friends (Hello, you each have to have a different cute picture of all of you to Instagram!), it’s also way safer.

Maybe you’re anticipating hooking up during your trip, or maybe you’re not. Either way, bring condoms. According to Dr. Durvasula, you should definitely not rely on the guy to have them. “Condoms are essential and women should be the ones holding them,” she says. “Ideally, the man has them with him, too—but don't let his convenient oversight put you in a bad position.”

Iris, a junior at UCLA, says she’s bringing condoms to her spring break trip to Cabo San Lucas even though she doesn’t plan on hooking up with anyone. “I always carry condoms, because it’s better to err on the safe side,” she says. “You really have nothing to lose—especially since you can get them for free everywhere on college campuses.”

Condoms are an important part of safe sex at all times, but they’re especially important if you’re not in a committed relationship. Spring break hookups, while spontaneous and fun, are usually random and unexpected. You probably won’t know how many people your hookup has been with, or even if he or she has an STD.

In addition to having condoms, you should also be diligent about taking your birth control, if you use it. Obviously, it’s a lot harder to remember to take it when you’re so hungover you can barely move from wherever it is that you fell asleep the night before. If you regularly take birth control to prevent pregnancy, though, it’s crucial that you remember to keep consistent throughout the week.

If you find yourself hooking up with someone (or multiple someones) during your break—even if you’re using condoms—keeping up with your birth control is the best way to protect yourself from an unwanted pregnancy. “Ideally the combination of condoms and another consistent method of contraception is optimal,” Dr. Durvasula says. You heard the woman: Get your butt out of bed (or off the beach) and take it, if you’re on it. Trust us, you’ll be glad you did.

3. Watch how much you drink

When you’re out in the sun all day, losing track of everything from the time to your cell phone, it’s a good idea to monitor your alcohol intake, as un-fun as that may sound. Susan Kirtz, health promotion coordinator at the University of Texas, says she knows that spring break “includes heavier drinking and increased sexual activity compared to everyday campus life.” That’s why you need to pay attention.

According to Kirtz, watching your alcohol intake during the week doesn’t just have to be counting your drinks; she offers several ways to make sure you’re not getting too drunk. “Stay with the same group of friends [when you’re drinking], eat before and while drinking and alternate alcoholic with non-alcoholic beverages, like water,” she suggests.

Kirtz also mentions the ugly truth we all know: Increased drinking means an increased chance of unprotected sex. The more careful you are about making sure you’re sober enough to make smart decisions about sex, the less likely you are to wind up forgetting to use a condom.

By the time you finish a middle school health class, you probably know something about (or have seen pictures of) the terrible signs and symptoms of sexually transmitted diseases. STDs are scary—but they’re also largely talked about and preventable. STIs—sexually transmitted infections—are generally less talked about, but still just as pesky. STIs can range from a yeast infection to chlamydia and gonorrhea.

Dr. Durvasula recommends that all sexually active college students get tested after every new partner for STIs—and especially after a spring break trip, when there’s a pretty good chance you have no idea what your partner’s sexual history is. “With STIs, early detection and treatment are important,” she says. “HIV can take six months to show up on testing, and some STIs such as HSV (Herpes) require blood work that often needs to be [separately] requested.”

Don’t be fooled by thinking that sex is the only way to get an STD—there are several other sneaky culprits that can leave you with an itch (or worse). While there’s almost no way to completely prevent yourself from ever getting a disease or infection, you can decrease the risk by using condoms and getting tested just to be sure. You never know who else that blonde from California (or was it Colorado?) you met on the beach has been with. 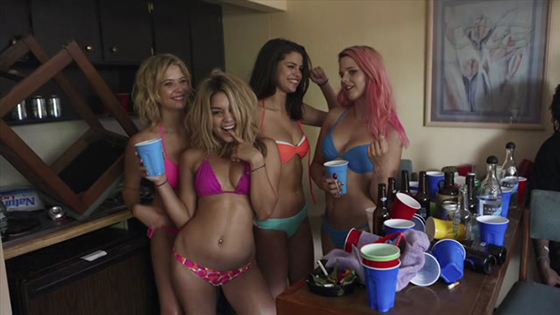 With all of the hype surrounding spring break, it’s easy to get super excited and set high expectations for what your week will be like. Once you’re in the middle of it and everyone around you is partying like there’s no tomorrow, you might feel the need (and desire!) to keep up and find a hottie to have some fun of your own with. There’s no harm in that—but Dr. Durvasula warns not to do anything you’re not comfortable with, as research shows that hookups aren’t exactly great for women’s self esteem.

“One-night stands are risky, not just medically but also psychologically,” she says. “Sex is great, but if it feels like it was while you were intoxicated or you weren't in your clearest state of mind, it can leave you wondering.”

Hooking up doesn’t always mean sex, but you should feel free to draw your own lines of what you’re okay with regardless of what your friends are doing. “Communicate with your partner,” Kirtz advises. “Before things heat up, talk about your sexual boundaries. The conversation may be uncomfortable, but you’ll be glad you took control of your own sexual health.”

Know what you’re okay with doing, and don’t feel pressure to push the limits over break. As Dr. Durvasula reminds us, “having sex is not a competitive sport, and she who has the most partners does not win.” She explains, “It's ok to say no—and even to go home not having kissed a boy with just a healthy, sunny glow.”

Make a plan to stay safe—and have your friends keep you accountable. If you’re prepared, you’re less likely to encounter any bad situations—and more likely to have the time of your life over break!