Political cartoons are meant to make jokes about the political climate, and some of those jokes will inspire while others will upset. I'm guessing political cartoonist Glenn McCoy meant to inspire with one of his latest cartoons, but really he just ruffled a whole lot of feathers. He released a cartoon paralleling Norman Rockwell's "The Problem We Live With," except instead of a little black girl who faced racist epithets on her way to school, he depicted Betsy DeVos, the recently confirmed Secretary of Education. That's right. According to Cosmopolitan, the cartoon quickly went viral due to sharp criticism. 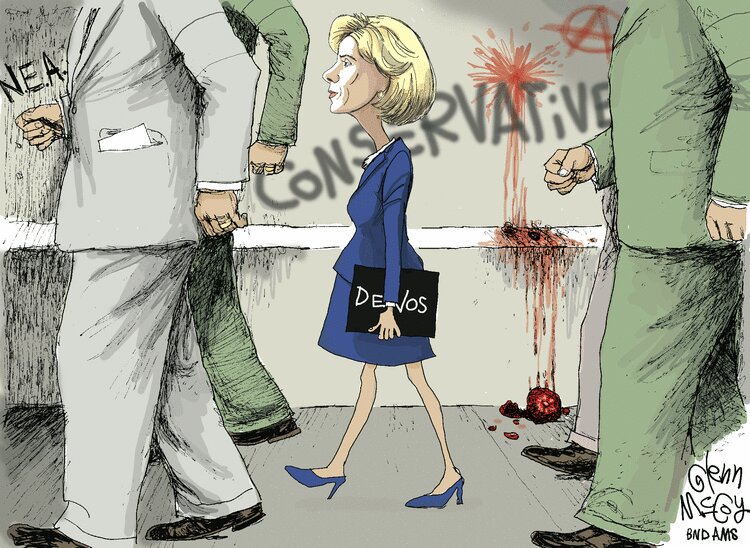 DeVos was confirmed as secretary of education in a vote so close that the vice president was forced to break the tie—a first for any Cabinet nomination. Her initial hearing exposed holes in her knowledge about public education, causing two Republican senators to turn against her.

Since taking the position, DeVos has faced a slew of criticism, especially on Twitter, where her new department has made some embarrassing typos. But the stiffest criticism came from protesters blocking her from entering a public school in Washington D.C. last Friday. She did manage to get into the school through a different entrance, and released a statement saying she will not be deterred from helping public schools.

The cartoon shows this incident in comparison to that of Ruby Bridges. If you're unfamiliar, Ruby Bridges was the then 6-year-old child who desegregated New Orleans schools in 1960. Bridges was chosen to integrate the all white school in her area, William Frantz Elementary School. As with any desegregation effort, Bridges and her family were met with substantial opposition—racial slurs, threats, and even parents pulling their white children out of the school. It was so much the National Guard was called in and accompanied her to school everyday. For an entire year, Bridges had to go to class alone with only her teacher to teach her. The original painting shows Bridges walking proudly in white as she walks to school surrounded by the National Guard. Behind her, the N-word and "KKK" are written on the wall, and a tomato is splattered on the ground as well. The painting was released in 1964 as a centerfold to LOOK magazine, and is regarded as an important piece of Civil Rights-era art.

McCoy's political cartoon drew criticism from many, including Chelsea Clinton herself who tweeted out. Much of the criticism was directed at the false equivalency between a black child's struggle during desegregation and a rich white woman facing criticism that she brought on herself. Not to mention this comparison was made during Black History Month, when the courageous acts of black Americans like Ruby Bridges are celebrated.

The original painting is of a 6-yr old girl being threatened with violence. but yeah, sure, she's just like a corrupt politician pic.twitter.com/7OTvuVF11h

Ruby Bridges is a bonafide black American goddamn hero. Shame on every one of you trying to co-opt what she did for Devos's benefit.

Many conservatives believe the cartoon is an apt representation of people being barred from schools. But here's the thing—segregation policy was based on racism, and the Bridges were ostracized and threatened with murder in their own community for daring to challenge it. Betsy DeVos is NOT protesting wrongful policies, and those protesting her were not doing so out of racism, nor were they threatening her life in any way. The protests happened for a day, not an entire year. A simple inconvenience is not the same as the centuries-long systematic oppression of black people.