Vogue is celebrating 125 years of existence, and its anniversary cover was meant as a celebration of diversity. 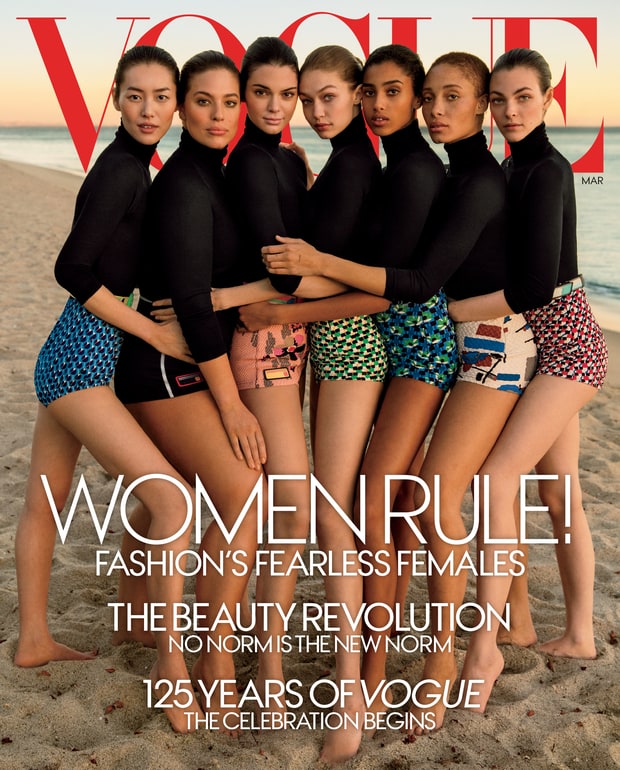 The cover featured seven iconic models as part of what the magazine called"The Great Beauty Shake-Up," including Gigi Hadid, Kendall Jenner, Ashley Graham, Vittoria Ceretti, Imaan Hammam, Adwoa Aboah and Liu Wen. However, it seems as though the only thing the publication ended up "shaking up" was people's comments about the lack of diversity on the cover, rather than truly promoting a beauty revolution.

Even though the ladies are technically diverse in their ethinicities, the magazine seemed to fail at representing all women. Some social media users commented on all of the models being a similar height and size, with Graham being the only exception, and all having light skin tones. That doesn't seem like diversity to me.

The magazine might have had good intentions with this cover shoot, but that didn't stop people from voicing their concerns on social media. One Instagram commenter wrote, “Vogue, you've been my favorite magazine since I first picked up an issue when I was 12. I’ve read every issue cover to cover and lived for the pages that you produce. I'm so bummed to see that you had an opportunity to be different and to be inclusive of ALL women and ALL body types, yet chose to put thin, size zero looking women on the cover to represent ‘all women.’ You had such a great chance here and I've never been more disappointed. I hope that in the future you'll finally start taking a chance on women that represent real bodies and real standards.”

Another went on to point out the slightly suspicious placement of Graham's arm (see how everyone else has their arms around one another?" and the incredible length of Hadid's arm (can a hand even stretch that far?!).

Apart from the underrepresentation of all ethnicities and the Photoshop fail, there's still an obvious issue with this cover. If Vogue was trying to go for a "beauty revolution," why did they pick some of the same models that have graced their covers several times in the past? A true revolution would be breaking down some of the barriers we still see in the beauty and fashion industries, and would help pave a way for all people. Maybe next time, Vogue.

Getting errors in report while setting the connection string dynamically.