Malia Obama hasn't exactly been sitting around and doing nothing during her gap year. The first daughter used part of the year off she decided to take between high school and starting her freshman year at Harvard University in order to take an 83-day trip to Bolivia and Peru - and her travels remained a secret until now. 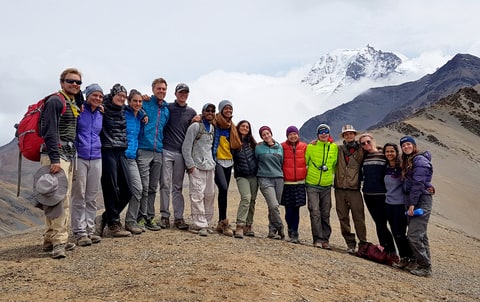 According to the New York Times, Malia took the trip alongside 11 other students through the company Where There Be Dragons, which organizes educational trips abroad for young people. She lived with a host family in the Bolivian town of Tiquipaya, and according to the program's website, "Examined social movements and environmental conservation efforts in the mountains and jungles of Bolivia and Peru."

For very obvious reasons, the trip was kept pretty under-the-radar until recently when Bolivian news media broke the story. According to the three guides Malia traveled with while on a hike through Peru, they were only warned that they would be hosting an important American dignitary - and it turns out that Malia was so humble they couldn't even tell which one of the 12 students required the extra security measures. "She was very humble, chatty, spoke Spanish very well,” Gregorio Mamani, one of the guides, told the New York Times. According to Mamani, Malia was also given no special treatment and took part in all of the exact same chores the other students did.

But seriously, can we talk about the fact that she managed to make it out of the country for three months and no one even noticed? That's some seriously stealthy stuff on the Obama administration's part. Not to mention the fact that we can't imagine what it's like to arrive at your study abroad program and find Malia Obama there. It's casual. NBD or anything.