On Tuesday, Dec. 6, Eric Trump, son of President-elect Donald Trump, announced that his charitable foundation would be auctioning off coffee with his sister, Ivanka Trump. According to BuzzFeed News, the 30- to 45-minute conversation was valued at a mind-boggling $50,000. By early that Friday morning, bidding had risen to $72,888. 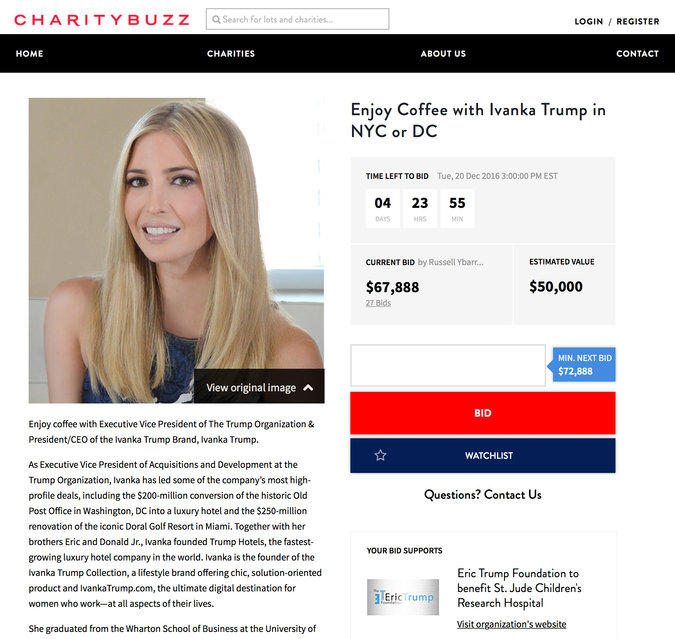 The auction was being held through CharityBuzz, an online auction site that describes itself as bringing “together hundreds of the world's most acclaimed celebrities, inspiring luminaries and beloved brands to give you unforgettable access to your passions.” According to both the listing and the Eric Trump Foundation’s original tweet, any money raised would go to benefit St. Jude Children’s Research Hospital. The New York Times put together a comprehensive list of the rules of the auction: The meeting would take place either at Trump Tower in New York City or at the Trump International Hotel, and while the winner would be allowed one photograph with Ivanka, they would not be allowed to bring anything to be signed. They would also have to undergo a background check, and the Secret Service would be present at all times. And of course, “All winning bidders and their guests to conduct themselves appropriately. Polite manners and respect for the generous donor and adherence to any rules or parameters are a must.”

Click Here to Bid on a Private Coffee with Ivanka Trump in NYC or DC to benefit The @EricTrumpFdn for @StJude! https://t.co/QuEO67Yj7Z

Curing children’s cancer is definitely a worthy cause, but obviously there’s more than a few problems with auctioning off a meeting with one of the president-elect’s most trusted advisors and a valuable member of his transition team. It's particularly worrisome when you realize that most of the people participating in the auction are hoping to get an inside scoop into President-Elect Trump’s future business or immigration policies because it's in their own self-interest. For example: Ozan M. Ozkural, an investment manager from London who told the Times that he hopes to get “a better sense of what the modus operandi will be,” particularly in regards to Trump’s future dealings with Turkey.

Understandably, the auction has stirred up more than a little anger. As Fred Wertheimer, president of the nonprofit organization Democracy 21, told the Times, “The president’s family should not be out raising money for whatever cause, in exchange for a potential influence buyer who wants to get his views to the president.” Not to mention the fact that bidders probably aren’t even that interested in helping sick children.

By Thursday, Dec. 15, Eric Trump was feeling the heat about the auction. By the following morning, the listing had been taken down. But this probably won’t be the last time we see Trump or his children brushing up against the limits of ethics.