This week, Lady Gaga unleashed her video for "Million Reasons" on us—and to say that it's an emotional roller coaster would be an understatement.

The video is a follow-up to "Perfect Illusion," the raw, adrenaline-fueled break-up anthem every girl needs. "Million Reasons" picks up with Gaga lying on the ground in the middle of the desert, where she was at the end of "Perfect Illusion." It cuts between scenes of her backstage as she's getting ready—clearly emotional—to her performing "Million Reasons" in that now-iconic pink pantsuit and hat from her Joanne album cover. In a natural progression of the emotions you process during a difficult breakup, you see the unbridled anger in "Perfect Illusion," and what it takes to process all those feelings in "Million Reasons."

It's possibly Gaga's deepest video yet—the song itself is enough to make any heart hurt, but watching the singer make her way through the stages of post-breakup grief makes it that much more powerful. And the best part is, her video shows that picking yourself up after losing love isn't something you have to do on your own. Throughout the video, there are small gestures from others that do a huge part in lifting her up, literally and figuratively. As she's backstage, she opens a gift who we later learn is a small token from her sister, and towards the end of the video, Gaga's friends race to her side as she's on the ground, picking her up, holding her as they cry with her. 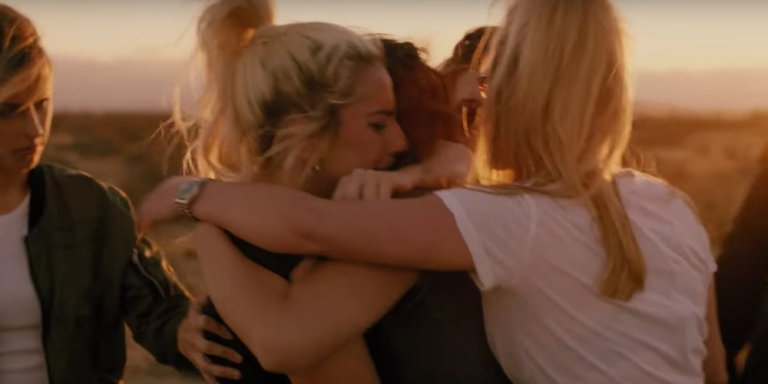 Heartbreak is never easy to deal with, no matter how it comes about—and losing the one person you'd always relied on and thought you would be able to rely on forever might feel like you have a hundred million reasons to walk away. But Gaga is right—all it takes is that one good reason from the people who actually care about you. And, uh, I'm not crying, you are.