They say the best way to get a job is get a personal recommendation from a friend or acquaintance who already works there. I guess that goes double for Trump's Cabinet and transition team. His most recent hire? Nikki Haley, the governor of South Carolina, has been tapped for the position of UN Ambassador for the Trump Administration. If confirmed, she will replace Samantha Power in her role as ambassador.

Once a top pick for Trump's vice presidency (despite their ugly history, which we will get into), Haley will leave her role as governor two years early. Haley said in a statement that while she imagined she would always finish out her governor position, she accepted the new role out of "a sense of duty." She will, however, continue to serve as governor until she is confirmed by the Senate. One thing standing in her way might be that she has "virtually no foreign policy experience," as The Washington Post puts it. As she has been a regional governor with no prior experience in foreign dealings, many people believe Haley just doesn't have the range to be ambassador. 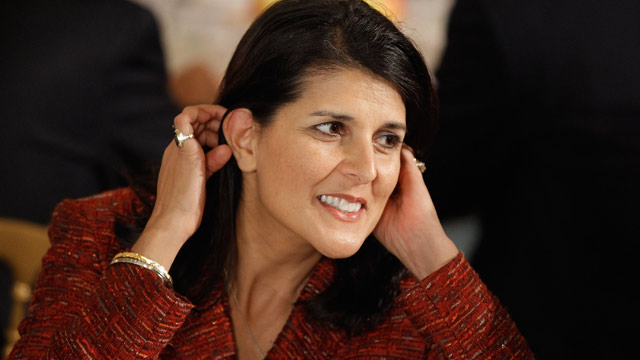 Haley is the first female and minority governor of South Carolina. The daughter of Indian Punjabi immigrants, Haley rose to prominence as part of the Tea Party movement, leading a successful 2010 campaign for the governorship. She also made headlines when she decided to remove the Confederate flag as the South Carolina state flag after calls of action in the wake of the Charleston massacre.

The first woman to join the Trump's cabinet and one of the few minorities (if that's what she considers herself today—Mother Jones has reported she sometimes self-identifies as white), Haley will join Alabama Sen. Jeff Sessions and chairman Reince Preibus on Trump's cabinet. Several people still vying for a position in the Trump administration, including Rudy Giuliani, Mitt Romney (that's right—Mitt) and Chris Christie.

This is a surprise move for the Trump camp, as he and Haley have butted heads. During the primaries Haley was a harsh critic of Trump. In her response to the State of The Union, she referred to Trump as "the siren call of the angriest voices." She continued on to say she believes he contributes to "irresponsible talk" and is "everything a governor doesn't want in a president." Trump even took to his favorite social media site, Twitter, and tweeted "The people of South Carolina are embarrassed by Nikki Haley!" (That tweet, by the way, is still up.) She endorsed Marco Rubio, then Ted Cruz, until both were forced to drop out of the race. She finally decided to vote for Trump at the Republican National Convention.

Well, I guess a congratulations is in order for Haley. Homegirl did get a promotion.