Ivanka Trump, the daughter of the President-elect, is coming under fire for plugging her fine jewelry brand after an appearance on 60 Minutes. It was the first interview with the president-elect, and featured his entire family, including Donald Jr., Eric, and elusive youngest daughter Tiffany. About a day after,  Ivanka's fine jewelry brand sent out an email to journalists, noting the bracelet she wore and its $10,800 price tag.

Email sent to journalists by an @IvankaTrump employee, hawking the goods she wore on @60Minutes. pic.twitter.com/aCpNbBBArg

The email, which was leaked by New York Times Sunday Style journalist Katie Rosman, came from the vice president of sales of the brand. It asked that the journalists share it "with clients" (journalists, not salespeople, but okay). This move caused widespread criticism, as it shows a HUGE conflict of interest. It makes it seem like Ivanka is using the presidency to make money. It isn't the first time Ivanka has plugged her line after political events—She also raised eyebrows after she promoted one of her dresses after the Republican National Convention. 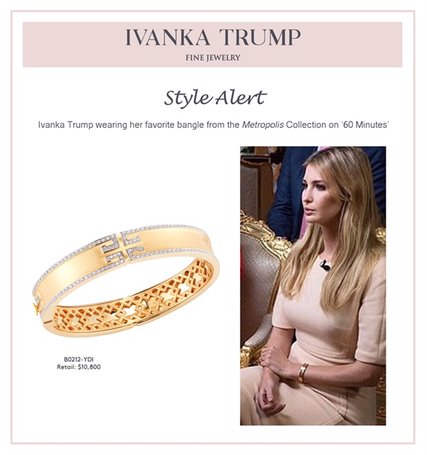 According to Teen Vogue, this move is typical for celebrities, but Ivanka is no longer just any celebrity. She’s the daughter of the president-elect and, by all accounts, a key part of his transition team. Many journalists have noted that while Michelle Obama and the current First Family were style icons, the press would have to search for where their outfits came from—they would never be sent a sales email about it.

The Ivanka team has chalked the whole thing up to a mishap, brought on by the post-election unfamiliarity. According to Chief Brand Officer Abigail Klem, the email in question was sent by a“well-intentioned marketing employee” who was “following customary protocol," and the company is making “adjustments post-election."

While Ivanka said during the interview that she wants to maintain her own businesses during the presidency and be a daugher, rather than a policy adviser, to President-elect Trump, I don't think that's how this works. But then again, it seems the Trumps don't know how this works either.