By now we've all been both educated and outraged by the outcome of the Stanford rape case and the lenient sentence the Brock Turner received. Although I wish that I could say these type of cases are rare, rape cases on college campuses occur all to frequently. What's even worse than sexual assault being so common? The courts continuing to place the blame for rape on alcohol or societal pressures.

According to the Associated Press, Brandon Vandenburg, a former Vanderbilt football player,  encouraged a number of his teammates to have sex with an unconscious woman that he had been dating in 2013. Not only did he verbally encourage them, but actually handed out the condoms and video taped the whole thing on his cell phone. Although Vandenburg is not being accused of having sex with the woman himself, his part in the act was just as terrible. 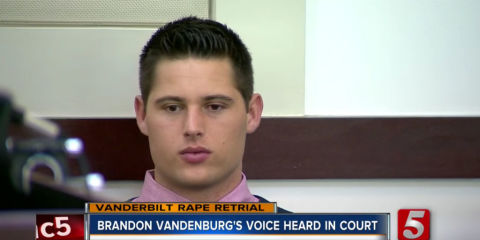 Prosecutors are currently fighting to prove that he should be held responsible for what happened to the woman in question, since he encouraged the act and was a part of the crime. Unfortunately, Vandenburg’s defense team is taking a similar approach to the one Brock Turner's team used.

Defense attorney Randy Reagan said, according to the AP, that “Vandenburg was a 19-year-old newly arrived recruit from a small desert town in California who had been introduced to a culture of drinking and partying at the school by mentors on the football team.” This is practically a word-for-word recount of the defense used for Brock Turner.

"Coming from a small town in Ohio, I had never really experienced celebrating or partying that involved alcohol," Turner wrote in his statement to the judge. "However, when I came to school in California, it had become what I expected when spending a Saturday with friends. I began to champion the idea of relieving the stress of school and swimming by consuming alcohol on weekends with people."

Vanderburg's lawyer also claimed that Vanderburg had been drinking for hours by the time the crime occurred, and just asked some football players to help carry the victim up to her room. Once they reached the dorm room, the lawyer said, the other players immediately jumped on the woman, without instruction from Vandenburg. This, however, has not been proven, and apparently the videos on Vandenburg’s cell phone tell a different story.

Vandenburg was charged with five counts of aggravated rape, two counts of aggravated sexual battery, and one count of unlawful photography. He and a teammate were actually tried and convicted once last year—but the verdicts had to be thrown out when the jury foreman was found out to have been a victim of statutory rape.

Vandenburg and his teammates has not yet been re-sentenced, but the hope is that they'll receive a more fitting sentence than the one that Turner did.